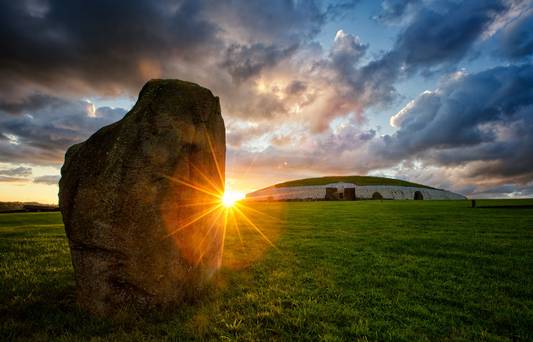 Well, it’s that wonderful time of year again. The Sun is reborn, and from here on will grow stronger with each passing day. Long live the Sun I say! Already looking forward to the brighter evenings ahead. Bring it on!

Unfortunately, the sun did not perform for the lucky ticket holders who crowded the inner chamber of the ancient Neolithic Tomb at Newgrange, County Meath, Ireland, this morning. They flocked to our Irish shores from far and wide, from all corners of the globe, in the hope of witnessing what our ancestors saw 5,000 years ago. The spirits of our ancient Irish ancestors mingled with the multi-cultural, and multi-religious gathering waiting patiently for the rising sun to flood the inner chamber with light on this very magical and mystical morn. Those without tickets crowded outside wanting to be a part of welcoming the rebirth of the Sun at Newgrange at sunrise on Winter Solstice. From the very young to the very old, they held their breath in anticipation. Some danced in circles beating drums, Celtic blood coursing through their veins, others sang, gave blessings and held hands. A guard of honor for the lucky ticket holders was formed by several Wolfhounds, an ancient Irish breed of hound, as they entered the tomb. Sadly, an overcast, cloudy and foggy sky blocked the sun from creating the magic in the inner chamber, but no one regretted being there. Instead they felt humbled and privileged. It is Ireland after all, a small island on the Atlantic. One is never far from a shower or two in Ireland. We are used to the weather misbehaving. Bad weather or not, it did not stop the many who gathered feeling a strong sense of deep connection with those who walked this land long, long ago (Fadó, Fadó). They marveled at the incredible feat of engineering that was required to build this famous structure. 5,000 years old and still standing!

This was a live stream with several interviews and chatting to the crowd beforehand in the build up. The actual event happens around 29.40 mins, but as mentioned above, clouds blocked the sun preventing the inner chamber from lighting up. Do not expect fireworks or a show of entertainment. This is not an event where people look for their money back if the sun doesn’t shine. They come to honor a very ancient ritual. Nonetheless it is good to watch. I live about 40 minutes from here and have been to Newgrange many times over the years. Like any ancient site in the world, standing on the land or touching the stone sends shivers down your back when you allow yourself to connect with those who came long before. They are our ancestors and we their descendants, with 5,000 long years between us. For just a moment, and if we allow it, the veil between us can grow thin and lift. We stand in their shadow, breathe the same air, our hearts beat to the same drum.

Categories: Personal Stories, The Wheel of The Year, Uncategorized