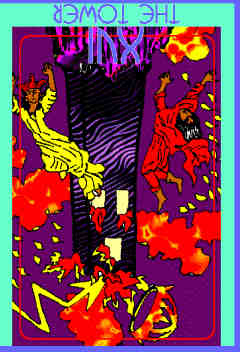 When The Tower Reverses the impact of the sudden change is not as severe.  You may have been warned in advance and have managed to get out-of-the-way just in time or avoided the change. That is for the moment anyway so don’t think you are out of the woods yet.  If you have missed or ignored the warning the first time it will approach from a different angle the next time and may be much worse. Health-wise it could be down to you ignoring the early warning signs from your body.

If there has been a threat of repossession of property or business by the banks then you may have been given extra time to sort it out.  You have been given a temporary reprieve but the situation has not gone away.

Your situation may indeed be collapsing but instead of accepting it,letting go and moving on you continue to seal up any cracks as they appear, pretending that all is well. The Devil still has a hold of you, making you believe that there is no better way and that there is no escape for you. The figures reversed now seem to wave their hands in the air.  Are you screaming for help and no one can hear you?

Somebody may have been tipped off in advance and have bailed out of a situation before it collapses. Is someone getting away with blue murder? Have the real culprits got away?

Are you or someone else causing deliberate upheaval to those around you?  Who is it that wants you to see you lose everything?  Why would they wish such bad luck on you?  What might you have done to drive them to such lengths?

With the flip side of the reversed cards The Tower Reversed can indicate an end to your difficulties, a health scare that has turned out to be a false alarm, a calamity that was all a lot of hot air, a storm in a tea up.   On the other hand you might be setting about rebuilding out of the ruins.  You may be working hard to salvage what you can.  This could be your reputation, business or marriage.  Damage limitation is key if you are to whether the storm

Back to The Tower Upright