The Magician (I) Reversed 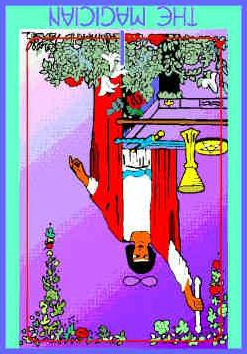 The Magician reversed carries some extremes meanings and it is wise to consult all surrounding cards before attempting to interpret him.  If in doubt pull a couple of extra cards with the intention of shedding extra light on why The Magician is appearing reversed.  Unfortunately, his presence in the reversed can highlight the fact that you have no power or feel powerless in your situation.

In general his presence can indicate either a lack of confidence or perhaps too much.  You can be acting cocky or feeling totally overwhelmed by the task in front of you.  Have you been given or accepted a job that you now realise is too much for you?  The reversed Magician suggests that you might be under-skilled or inadequate in this situation.  He is telling you that you have neither the right tools nor a workable plan to make it a success.  You may find it hard to finish anything you start because you really don’t know what you are doing.  It may be obvious to those around you that you are out of your depth in this particular situation.  It may not be a time for going it alone.  Seeking the help of those who have the necessary tools or skills may save the day.

The reversed Magician speaks of lack of knowledge and intelligence.  He seeks power and influence but there can be an absence of education and basic qualifications. This may find you pulling a few strings to get where you want as you cannot do so on your own merit.

You can be acting without giving much thought to the outcome.  You have nothing in place yet and no idea of what it is you really want yet you keep on going. However, the reversed Magician can imply that you know exactly what you want, how to go about it and that success is guaranteed but the time is not right.  He can suggest that you are not in a position to focus your attention or commit fully to the project at this time.  He can indicate that you may be trying to run with a new idea or project before you have adequately finished another.  Impatience and frustration may be evident as you desire to be free to get going with your plans.  You might be advised to return to the lesson of The Fool which will help you tie up any loose ends before you are free to pursue new goals.  You will then be able to give it your undivided attention. You may feel pessimistic and negative as a result.

In the reverse, The Magician’s ability to communicate or articulate his ideas to other becomes blocked.  You may not be great at speaking in public or find that your lack of articulation is letting you down when trying to express yourself or impress others.  If you are trying to promote a new product or break into the overseas market it may not be received too well as your sales pitch may not be working for you.  On the other hand you can be all talk but no action.

In his negative self, The Magician can highlight a misuse or abuse of knowledge and power to control others. He now assumes that his power comes from him and not through him.  He will use any means to get his own way.  He has no time for anyone who attempts to block his path or has different opinions to his. He becomes a dangerous and sometimes sinister figure.  Losing his connection to either the heavens or earth he can become ungrounded and mentally or emotionally unstable. He is controlling and often a violent bully.

He lacks willpower and self-discipline; using cunning and underhand ways to get what he wants. He can convincingly lie and cheat.  He becomes the Master of ‘The Scam’.  He becomes the con artist who can swindle old ladies out of their lifetime savings or entice you to sign a contract that will enslave or entrap you.  Be very cautious and suspicious of anything you are about to get involved in when The Magician appears reversed.  Check all fine print on documents or contracts.  Check for fake Identity Cards, references or credentials.  He could be trying to set you up.  You would be advised to do an internet search on this guy to see what sort of reputation he has.  The annoying thing is that he sounds so convincing and kind.  Surely someone with such charisma as him is beyond suspicion??? True, but he could be trying to ‘pull a fast one’.  If this reversed Magician is around you at present then be on your guard as anything he is trying to push may just be the work of a master illusionist with a hefty sprinkling of faerie glamour.

In his most negative sense The Reversed Magician has neither conscience nor morals. He often turns his great and brilliant bright mind to unlawful activities.  He can be found as the head of a criminal gang or organisation. He will stop at nothing as he believes the end justifies the means. He shows no remorse and offers no mercy to those he finds disposable.  He becomes the Assassin and the mercenary who will mingle undetected in the crowd while he carries out the most heinous of crimes.

The wonderful mind of the upright Magician who seeks new discoveries to aid humanity now uses his mind to develop weapons of mass destruction and warfare when he reverses.  He uses science to mutate and control energy forcing it into all kinds of obscene creations.  He is the IT genius who prefers to spend his time creating computer viruses rather than useful software programs.  He is the hacker who can get by any internet security or firewall to steal your identity and your bank account details.

The Reversed Magician is often out of touch with reality. He can appear as several personalities within the one.  He can suffer from hallucinations or schizophrenia. Violent and severe mood swings can surface which can seriously damage any relationship he is in. The Magician reversed is often a compulsive liar, and a very convincing one at that.

In relationships, the Reversed Magician can suggest a domineering, controlling and possessive partner. He is a bully who with his dysfunctional mind can inflict mental, emotional and sometimes physical abuse. On the other-hand, the Reversed Magician could point very much to the opposite. He may be weak, indecisive and overly reliant on his partner to sort his life out. Like the Emperor Reversed, he could seek a strong domineering woman as his partner.

Travel related, the reversed Magician suggests aimless wandering and travel with no purpose or plan.

Back to The Magician Upright

Love The Magician? –  Check Out Some of These Great Finds Online!