The Suit of Pentacles

The Suit of Pentacles – Earth

Pentacles also known as Coins, Disks or Diamonds are represented by the Element of Earth. Earth represents that which is real, material or in the physical form.  Wands demonstrate enthusiasm and a positive approach to life.  Cups describe the emotional, sensitive and creative approach while Swords show us thought, ideas and understanding.  Pentacles relate to the end product of these things.  Pentacles finish off what the other three Suits begin. They are the doers, the plodders, the stable and reliable.

A Pentacle is a five-pointed star with a single point upright.  Each point represents a part of the body, which are the head, the arms and the legs.  The upright point symbolises the mind in control of the physical passions.  The circle that surrounds the star contains and harnesses the energy within so that it may be used for practicalpurposes.  Pentacle types demand groundedness, as they believe that one cannot live on air, love or just sheer energy alone.

Pentacle types love possessions and luxury and often surround themselves with beautiful things, such as clothes, jewellery, cars, houses, art etc.  They are hard workers who are prepared to put the effort in for as long as it takes.  However they must be sure that all their efforts will pay off as they insist on being well rewarded for work done.  Pentacle types do like money.  In fact they like lots of it.  They make sound business people and can literally make money grow on trees. They are not risk takers and are cautious about getting involved with anything that might be financially dodgy.  They can build a business from scratch and have the patience to slowly and steadily watch it grow into an empire. They are the long-term investors of the Tarot.  These are not the rich today, poor tomorrow people.  They lay down solid foundations that will last for generations to come.

Pentacle personalities make excellent students from a very young age.  They are consistent in their work and will steadily pace themselves until they qualify in their chosen subjects. They usually know what they want to be when they grow up from an early age and will work towards it with little distraction.  They are quiet and unobtrusive and not given to the foolish antics that some of the other Suits are.  They don’t appear to have a careless or reckless bone in their body.

Pentacle people love nature and the countryside and do not function well if kept away from it for too long. Therefore they are often drawn to careers that bring them into constant contact with the natural world such as farming or animal welfare.  Animals are considered very important to the Pentacle personalities who like to surround themselves with a variety of well looked after pets.  They are also good in the garden and tend to have natural green fingers.

They not only care about their environment but also have a keen interest in maintaining their physical bodies. Pentacles enjoy good food and good wine and are especially drawn to organic and free range products.  Pentacle people often appear healthy, alive and grounded.  Although they may appear dull and boring to some of the other Suits, the Pentacles do have their own charms and are renowned as being some of the most beautiful of all the Suits.

They can be broody and sullen but do tend to have a wicked sense of humour behind it all.  In relationships the Pentacle people are not the most romantic of the Suits yet they are extremely sensual.  Being Earthy types, they do love to touch and be touched.  Pentacles show how much they care by the gifts that they shower their loved ones with. Money speaks and can cure all evils.  When a Pentacle type wants to express their love or how much they care for you it will more than likely be through an expensive gift, a new car, a work of art or dinner in an expensive restaurant.  Soppy cards and romantic gestures don’t sit comfortably with them.  However, they are reliable, loyal and stable partners who will look on their partner as one of their long-term investments or even possessions!

Pentacles pride themselves on their home which usually is beautifully decorated with the best money can buy.  They like to entertain but not mad parties mind you.  Elaborate dinner parties can be thrown together at a moment’s notice especially if business colleagues or contacts are among the guests.  Along with being good gardeners they also make wonderful cooks.

Priding themselves on their appearance and physique they can be quite sporty.  Unlike the Wands personalities they like their sports to be more traditional.  Anything that takes them out into nature will be preferred.  Sports such as horse-riding, orienteering and golf are popular.  If they could, Pentacle people would walk everywhere for they like to be out in the open.

The typical Pentacle person loves habit, routine and traditions and can often be found returning to the same holiday destination each year.  They don’t need a guarantee of sun to make their holiday a success and are quiet happy hiking through hills in the pouring rain.

Pentacle people can be very conservative and conventional which may appear boring to many.  The other Suits might accuse them of being overly materialistic, mean and stingy.  They are however, capable of being very frugal when necessary.  Great at housekeeping, they can make a little go a long way.  They are reliable, loyal and very committed to whatever they set their mind to whether it be business, family or relationships. They can be terribly stubborn at times though and will dig their heels in if they feel they are being pushed or manipulated in any way.

Pentacle parents will be loving, supportive and stable.  They will invest a considerable amount of money in their children’s education and sporting activities. 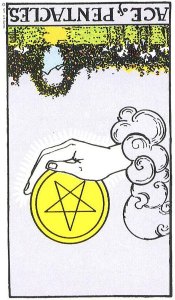 On the flip side the negative Pentacle parent can neglect their children terribly and be overly controlling and possessive. As we noted earlier, Earth in its extreme can also bury us making us far too grounded and rooted.  This sets the stage for us to become set in our ways, stuck in a rut and far too materialistic for our own good.  When this happens new ideas are often stifled in favour of the old way of doing things.

Lack of emotion in relationships can lead the negative Pentacle type to buy their love through expensive presents and extravagant gestures.  The recipient of these could easily be the trophy girlfriend/boyfriend/husband/wife only chosen for looks and connections and not for love or compatibility. The Pentacles love of expensive things and money can often find them marrying for money instead of love. They can plot and plan and wheedle their way into the heart of a wealthy partner, suck up to the boss to get to his daughter and even accept money to be the escort of a wealthy ageing man or woman.

The negative Pentacle can be controlling and possessive with their partner.  Money can be withheld for any perceived bad behaviour. In fact they often use money as a weapon in their relationships.  They can be mean with not only their money but also their emotions. They become even more stubborn when in the negative and refuse to budge or compromise on any issue.

When Pentacle types lose their connection to the Earth they become ungrounded and lack the steadfastness of their normal self.  Pentacle types are great business people and can literally make money grow on trees but in their negative state they lack the strength and tenacity of the positive Pentacle.  They can get involved in doomed get-rich-quick schemes.  Worse still, they can drag others down into financial ruin with them. They still love money and all it can buy them but they are not particularly interested in working for it. Underhand business deals and string pulling can be evident.

Pentacle types often value their possessions more than they do the people around them.  Money defines who they are.  Money is everything to them.  This is all well and good when they have it but when money is in short supply they become panicky and feel worthless and wretched.  They can slink into a depression and feel that their life is surely over.  They often find that when their money goes, so too do their so-called friends.  The Pentacle person in this situation has to learn a very hard lesson and that is that “money cannot buy happiness‟.  Sometimes they need to lose everything in order to realise the riches that still remain.

The negative Pentacle finds it hard to commit to anything, be it college, a job or a relationship. They lack the steadfastness of the positive Pentacle.  They can drift from one thing to another with no plan of action or long-term vision.  They lack proper skills and their work can be shoddy.  As a result they can become lazy and slobbish.  They often neglect their bodies and are careless about what they put into it. When in the negative style Pentacle types lose interest in looking after themselves, their family, home and animals. In fact they can be guilty of plain old animal or environmental abuse or neglect.

Often the negative Pentacle’s problem stem from their childhood and if poverty was an issue than their very fear of scarcity can prevent them from becoming financially stable.  When in this state they believe there is not enough to go around and can be extremely envious and jealous of others who appear to have more than them.  This is the Pentacle who will live in squalor while a fortune hides under the mattress. They can become frugal to the last even denying themselves comfort as the fears the money will run out should they spend any of it.

*When several Pentacle cards appear in a layout it indicates that financial, career or material things are foremost on the mind.

When several Pentacle cards appear reversed you can bet your bottom dollar that money is still a big issue but this time there may a lack of it.  Poorly managed finances or a business in trouble may be present. Access to finances may be blocked for one reason or another. A lot of stress and worry will accompany the situation.