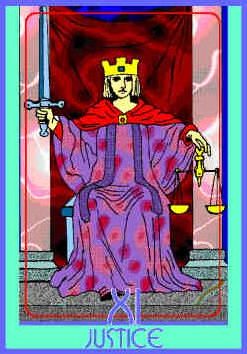 A woman sits on an impressive throne between two grey pillars. She is dressed in a red robe and green mantle. A veil hangs between the two pillars which reminds us of the veil in The High Priestess. The woman holds a balanced scale in one hand and an upright sword in the other. One white shoe is visible under the red robe.

The Justice card represents exactly that, Justice.  She appears in a reading to remind you that you are at a point in your life where you exactly deserve to be.  The laws of Karma apply right now. You are reaping exactly that which you sewed.  The scales are balanced and the situation has turned out just as it should. You must take full responsibility for where you are now, for all your preceeding actions, thoughts, ideas and deeds have brought you to where you are now. If your honest with yourself you will accept this and address the situation or make amends.

Here you stand before the Judge, but in reality the Judge and Jury are  both yourself. You may lie to others and pretend to be something you are not but you are only fooling yourself. The Justice card is compassionate though. Her upright double-edged sword, only one of two in the Tarot (the other being the Queen of Swords) shows us that she understands the duality in life, that there are two side two sides to the story. Her double-edged sword also reminds us that there are consequences for everything we do in life. No one can escape her Spiritual Court of Law. No one can hide the truth. The scales are balanced and The Justice card is both judge and jury. There is no getting away with the crime and blaming someone else. The finger is pointed at you and no one else. You are the orchestrater of your own life and so are responsible for each decision made and each action taken.

When you stand before Justice she looks straight at you and through you. She demands to hear your side of the story, your version of the facts. She will tolerate no lies and no trying to offset the blame for her sword has the ability to pierce through any obstruction in search of justice as it pierces through to the heart of the matter and the truth. Her one white shoe reminds us that she has pure motives and intentions. She is not here to make your life miserable or to let you off with the crime.  She doesn’t have to, you have done it all  to your self for good or bad, she is just here to remind you of your Spiritual Purpose and help you take stock of your life so far.  Her job is to hear the story from both sides and then make a fair and just decision.

In The Wheel of Fortune Reversed, you may not have been too happy with your circumstances but Justice reminds you that you either have something to learn from it or is simply a result of all you have done to date. You must consider the result of your actions when Justice appears because your very future depends upon it. If you plead guilty now and vow to sort yourself out and make amends then all is not lost, but if you deny or attempt to pass the blame onto someone else then the full power of the laws (karma) will be come into effect.

The Justice card along with the Empress and the Queen of Pentacles represents the Sun Sign of Libra. Part of the challenge Librans face in life is to take responsiblity for their circumstances instead of trying to blame others.

When the Justice card appears it can mean that whatever situation you are in at present is turning out just as it should. Generally, when Justice is Upright it means that things are turning out in  your favour. If you have been working very hard towards a goal then the Justice card will indicate that your hard work is about to pay off.  You are exactly where you are meant to be at the moment and everything is in Divine Order.

It is a time for you to sit down and think about your lot and what you have said and done. Be honest with yourself first and then be honest with those around you.  It is time for you to account for your actions. Are you worried about been judged unfairly by others? You may be surprised to find that they will be on your side once you give them the full truth and facts.

As Justice is strongly associated with Courts and Law, legalities of all kinds may be indicated.  You may be signing  contracts or documents, signing on a house, business or even a marriage contract. A settlement may be made in your favour. Court cases, lawsuits or investigations may be ongoing.  However, when Justice is Upright she generally suggests that Legal proceedings should go in your favour once you are honest and upfront.  If you have tried to conceal the truth or blame another, you may get away with it but not forever.  The Wheel will eventually turn and come full circle.  You may find yourself back in court again or worse.  The judge may not be so lenient the next time.

If you are in a relationship then the appearance of Justice in a reading would indicate that you are being totally honest with your partner or that you take full responsibility for where the relationship is right now.  Marriage may be is indicated but look for a couple of other cards for confirmation such as the two, ten, three of Cups and Lovers card.

If Justice is found with the Six of Wands a very successful triumphant outcome is suggested.

Justice in a reading may simply represent a person or career such as a judge, lawyer, solicitor . Justice and her scales can literally mean that you are balancing your accounts, your checkbook or your taxes.  You may just be trying to sort things out in your life and the other cards surrounding  Justice will give you evidence of such things.