Hello to all my Tarot Friends around The World,

Wow, thank you for contributing so eagerly to the Practice Daily Card Readings and also for coming to the aid of a Tarot Student who is in a bit of a bind at present and having difficulty with certain Cards that keep popping up.  Well done everyone.

This Reading is a current real-life scenario and not the normal free-style dramatic versions we have been working with in the Daily Two Card Readings.  Yes, this is a real dilemma. The Tarot Student has been following all your interpretations and theories very closely. I was asked to post this message to all of you on their behalf.  So there is a possibility that these Cards will be added to or as I suggested, a Reading done based on The Seven of Cups and The Eight of Swords to determine why they keep coming up and how to find a way out of all those Swords.  The message is posted below.

“Hiya Vivien, would you please pass on my thanks to everyone for their thoughts.. i really appreciate their perspective. I still haven’t done a further reading.. I guess I’m too scared what I might see… but when I do I will let you know. Thanks for your support and insight. Love and light.”

When my site is completely ready to switch over to WordPress.org I will be installing a plugin that will allow for a Forum. You will then find it much easier to share your card readings, interpretations, discussions and network.

With Regards to Daily Card Reading Practice, here are two, Billy my partner pulled yesterday. Remember, he is still on the trail of property hunting following the disappointment of The Dream House in Dingle failing the Survey Engineer’s Report. I have asked him to share his own interpretation of these in the comments section of this Post today. I already have my own theories.  You are also welcome to offer your opinions too if you wish. But before you do that, I want you to take into consideration one of his Daily Card Readings from last week, which you will find further down the Post.

Yesterday’s Cards – King of Pentacles and The Five of Wands 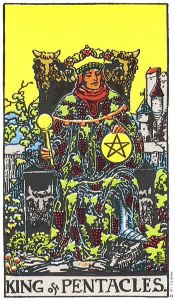 While he was waiting for me at my WordPress.org training last week, he decided to go for a drive to a coastal town that was nearby in Greystones, County Wicklow, Ireland. It was his birthday that day and the sun was shining. He went for a walk on the beach, strolled around the seaside town and had a cappuccino outside a quaint little coffee shop.  He had a lovely time and did a little bit of exploring.

When he picked me up a few hours later, he was gushing about how beautiful Greystones was and how he had looked in some of the windows of Estate Agents. He spoke of a couple of houses he had seen and how well they were priced. My goodness, I thought, from Dingle to Wicklow all of a sudden. On the drive home, he chatted about how convenient to Dublin, it was, with trains getting one there in a matter of minutes, yet still being in the County that is known as The Garden of Ireland in Wicklow, and beside the Sea too.  We could pop into Dublin any time we wanted to go to concerts or  the theatre. We would be ideally located.

I listened and oohed and ahhed in all the right places, but to be honest my mind was on all I had learned at the training and worrying about how I was going to manage it all on my own. I was also exhausted from information overload. We went home and further discussed it over dinner and our usual glass of wine.

The next morning Billy did his Daily Card Reading. He drew The Six of Cups and The Queen of Wands.

He read up on their meanings but was unsure of how they were connected to him.  I was quite busy working on my computer so did not have much time to give it a lot of thought. However, later in the day I called out to see where he was as the house was very quiet. I had been so involved in working on my new site I was unsure as to whether he had left the house or not. I wanted a cup of coffee and a break from the keyboard.

I found him upstairs on his laptop looking at property websites. He was scouring through property for sale in Greystones and had already selected a few he intended to go and see. He certainly was spreading his wings a bit and being more adventurous with his property searching. I told him that the kettle was boiling so coffee would be ready, like now!

Back in the kitchen, I passed the two Cards he had drawn and The Queen of Wands caught my attention. What are you doing there I thought but it struck me quite fast what was going on. It was The Queen of Wands who was encouraging him to think outside the box and not restrict himself to the possible rose-tinted idyllic, romantic version he had of moving to Dingle.  She was whispering to him about the benefits of being near to the cultural and historical city of Dublin. Reminding him of all the places he likes to go to and the things he loves to do. She was telling him that he might get a bit closed off in Dingle, lovely and all as it is, he might long for the buzz of the city. Could Dingle end up being too far away? I am not sure The Queen of Wands would like to be so restricted. She was getting him to use his imagination and open his mind to the possibility of other places to live. Places that would be fun and exciting, and still tick all the boxes.

I saw her sitting beside The Six of Cups and felt a pang of sadness for Billy. The Six of Cups highlighted how nostalgic he felt about Dingle. After all he had spent many, many, happy boyhood summers attending the Gaeltacht in Dunquin, Dingle where he learned to speak Irish fluently. He had fallen in love with it as a child, and since then has been trying to find his way  back to it.  He called it is his Spiritual Home and dreamed of retiring there.

I too have my own connections and nostalgia attached to Dingle. It was my son’s favourite place on earth, the place he chose to spend his last holiday before he died from cancer in 2007. For many years too, I have also dreamed about moving to that wild Atlantic coastline where next stop is America.  However, The Six of Cups sitting beside the bright and bold Queen of Wands made the imagery look quaint and cute. Would our coloured memories and desire for the dream, in reality turn out to be very different. The Dingle of today, may be very different to The Dingle of Billy’s distant boyhood memories.  The Queen of Wands was certainly making him sit up and take a good look around at his other options, even encouraging him to think of buying overseas. Yes, Dingle remains the top of the list, but maybe there is somewhere else he should be looking too. I felt grateful for her presence and the influence she was having over him.  I want him to make the right decision and for all the right reasons.

We discussed the relevance of his Cards over coffee and he has decided to do as The Queen of Wands suggests. He will be a little more open and adventurous in the search for his dream home while keeping a tight eye on Dingle too.  From now on, he, or should I say we, will be leaving our Rose-Tinted glasses at home when we go property hunting.